Lumberton Junior High has participated in the NC Future City Competition since it began in 2001. 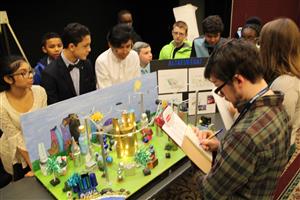