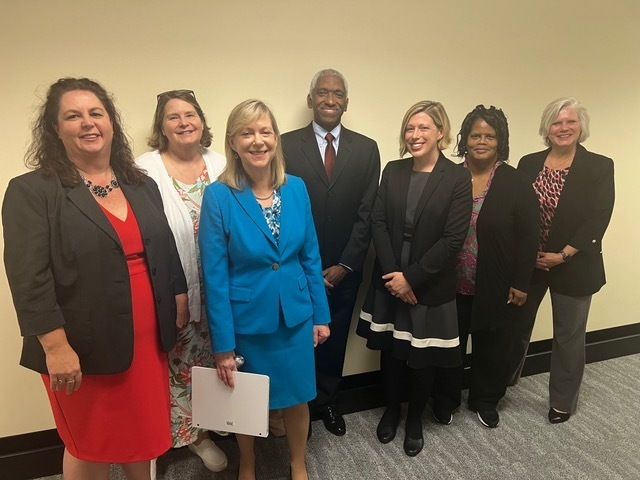 ​ King joins others in advocating for STEM program

Photo Caption: Lumberton Junior High School Career and Technical Education teacher Phyllis King, second from right, was among multiple presenters including Professional Engineers of North Carolina Past President Pam Townsend, third from left, Wednesday who stood before the N.C. House Select Committee on Advancing Women in STEM to advocate for the Future City Competition and its impacts on students through STEM.

LUMBERTON – A local Career and Technical educator joined others Wednesday in a presentation to the N.C. House Select Committee on Advancing Women in STEM  that displayed the importance of the Future City Competition in the lives of students who participate.

Phyllis King, a longtime CTE educator at Lumberton Junior High School, was among the presenters along with Professional Engineers of North Carolina Past President Pam Townsend and former program participant Leah Townsend. Dr. Rachel Jhala, King’s former student, was unable to attend but recorded a video about the competition’s impact on her life as a student.

The Future City Competition gives students the ability to use their creative side as they present projects of innovative future cities, as well as technology and engineering skills involved in crafting the cities, King said.

Jhala, who is a recently graduated optometrist, has fond memories of participating in the competition in grades 7-8.

“I’m thankful to have had that opportunity to participate in it,” Jhala shared in a video played during the presentation. ”It has enabled me to think outside of the box and think of possible future career endeavors … Not only did this Future City (Competition) jumpstart my interest, but I also made lifelong friendships and connections.”

Jhala thanked King for her involvement in the program and for giving her students the opportunity to participate.

King, who has been teaching at the school for about 21 years, said she has seen multiple students take paths toward STEM (Science, Technology, Engineering and Math) careers.

“I’ve seen a lot of them learn about the career of engineers,” she said. “I've seen them become engineers.”

King is passionate about the success of her students and has been recognized for her excellence as an educator when she received the Outstanding Educator NSTEM™ Champion Award from the National STEM Honor Society.

Her students also have been recognized in Future City competitions multiple times including as recipients of the Best Use of Infrastructure specialty award in 2021, the Most Innovative Water Re-Use Concept award in 2020, fourth place designation in 2019 and  Best Use of Energy in 2016.

King calls participating in the competition a “win-win” and looks forward to continuing her 21-year track record of getting her students involved for years to come.

King said that the effort cannot be accomplished by one educator alone, but will take continued collaborative efforts of a team.

She extended gratitude to David Causey, an engineer mentor, and Desi Bethea 6th grade ELA Teacher at Lumberton Junior High School who provide support for her students as they compete each year.

The Future City Competition was formed in 2001 with the first competition in North Carolina beginning in 2002, according to the presentation. Additionally, some components of the program can be used in the classroom without competition.

“The North Carolina Future City Competition is part of a national STEM program for middle school students. Nationally, 40,000 students in 6th, 7th, and 8th grade work in teams with a volunteer industry mentor, and educator to imagine, design, and build cities of the future that showcase their solutions to citywide issues,” according to the presentation.