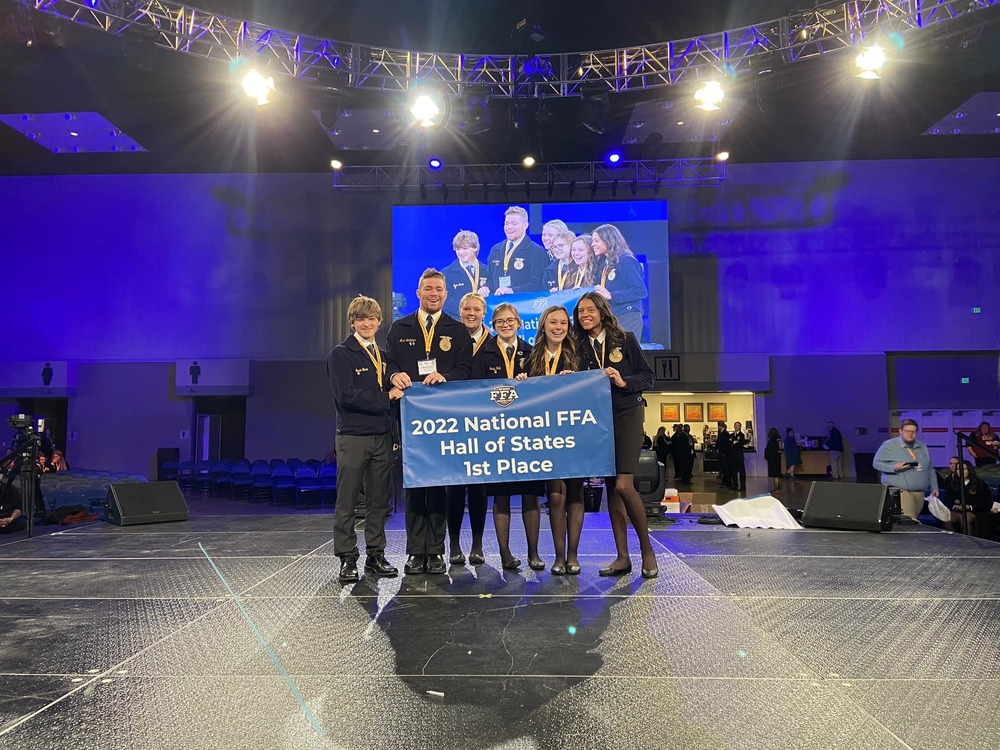 The FFA chapter placed first in the 2022 National FFA Hall of States and Building Communities Division.

The Hall of States is “a collection of booths run by FFA members to showcase agricultural diversity in their states,” according to the National FFA.

“It was really an honor to receive the 2022 National Hall of States Award. It’s very rewarding just to see all the hard work and dedication put into the booth being recognized. Just knowing this was the last Hall of States and we won makes it even more special,” said Lumberton FFA Chapter Vice President Ivey Nolley.

“We were asked by our state to decorate the booth because back in June at the North Carolina State Convention we were recognized as the top chapter in the state,” Nolley added.

“It feels amazing to bring this home for all the members who worked hard but couldn’t be there,” said Lumberton FFA Jr. Chapter Secretary Gavin Merlo, of the 2022 National FFA Hall of States Award. “Big shout out to Zion Jones, who put in countless hours with Mr. Pittman building.”

Chapters like Lumberton FFA which received a 3-star rating were eligible to compete for National Premier Chapter Awards that recognize the top chapters in the following divisions: Growing Leaders, Building Communities and Strengthening Agriculture.

The chapter was chosen from the top ten premier chapters in the division. Members’ work in the “Bake the World a Better Place” activity helped lead them on the path to recognition. The activity consisted of a bake sale in which members and local bakeries donated baked goods to sell in the community. Money raised was used to purchase bikes for Robeson County foster children during the holidays.

The activity was the result of a partnership between the chapter and the Robeson County Department of Social Services for the annual project, according to Candace Grimsley, an FFA adviser.

Grimsley said she is very proud of her students.

“Winning the Premier Chapter Award from National FFA is the most prestigious award the Chapter has ever won,” she said.

“Being able to be part of this milestone is truly amazing. Winning the Hall of States at the National Convention is definitely the cherry on top! I am so proud of the six who were able to represent our chapter at the National level but none of this would be possible without all of the members who helped on both of these projects,” Grimsley added.

The recognition is the highest degree obtainable in the National FFA organization granted for member dedication.

“The Public Schools of Robeson County congratulates Lumberton FFA members on obtaining the first place 2022 National FFA Hall of State award and Building Communities Division. The recognitions are a reflection of the hard work and commitment of the chapter and its advisers, who are to be commended,” said PSRC Superintendent Dr. Freddie Williamson.