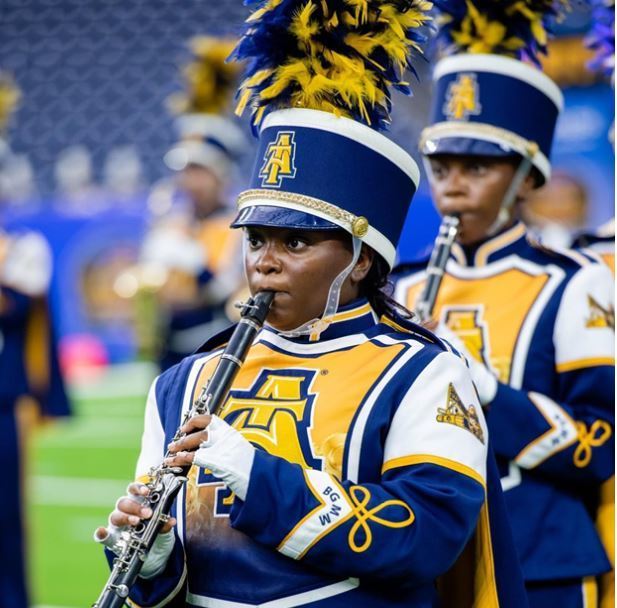 GREENSBORO — A former Lumberton Senior High School band student was recently featured in a North Carolina Agricultural and Technical State University video depicting her involvement in the university’s band and what inspired her to attend the institution.

Ashlynn Paige is a 2019 graduate of LSHS and is currently playing the clarinet in the university’s Blue and Gold Marching Machine band. Paige is a senior Biology student and the president of the Theta Zeta Chapter of the Tau Beta Sigma National Honorary Band Sorority Inc. Paige plans to attend graduate school and earn a master’s degree in Health Science in her pursuit of becoming a pathologist assistant.

She could be seen in the university’s video sharing what a day in her life looks like as she attends college and juggles responsibilities as a band member.

Paige shared in the video that what drew her to the university was the band and the influence of her high school band director Lorenza Floyd who also marched in the university’s band.

“I looked at their Biology Department later, but the first thing was the band,” she said in the video.

Paige said music has had a substantial impact on her life.

“I’ve loved music as long as I can remember,” she said.

“Music has always been an experience for me. Music is a feeling, an emotion, almost a physical essence. When I’m around music, whether it’s listening to music or playing my instrument, there’s a natural calm that wipes over my entire body,” she said.

She described the feeling of joining a marching band as “natural” because “ its values line up with the love and appreciation for music.”

Paige said being a band member has inspired her, and that inspiration reaches back into her high school career at LSHS.

“Band has inspired me to be more ambitious,” she said. “Being in band is about producing good work ... I work hard to always produce good work whether that’s in academics, on the field, or whatever. My favorite part of high school likely was band. I loved the parades,” she said.

“Ashlynn was always a very intelligent young lady, she was in Beta Club, National Honors Society and National Technical Society. It is no surprise seeing her on  ‘A Day In The Life Of BGMM,’” Floyd said.

“Many of our band members watch those episodes to see who we have met at Band Blowout hosted by NCA&T. To actually have a former student highlighted is amazing,” Floyd added.

It is the mission of PSRC programs and educators to leave a lasting impact and “lifelong love of education”  in the lives of students as they move on and prepare for college, according to Steven Taylor, PSRC Arts Education supervisor.

“Currently we are renewing our vision for band programs in PSRC,” Taylor said.

“Our extracurricular programs took time to rebuild after the pandemic and now we are looking to the future for our bands. We want to give all students an opportunity to play an instrument. We also want to see bands participate in our sports programs to foster community and school pride,” he added. “Instructors like Mr. Floyd at Lumberton Senior are integral to seeing this vision through.”

Paige and Floyd emphasized the importance of band and why students should get involved.

“I think any student who has a passion for music should get involved in the band,” Paige said.

“Every day in the band we learn to manage, adapt, perfect and we still have time to love the band,” Floyd said. 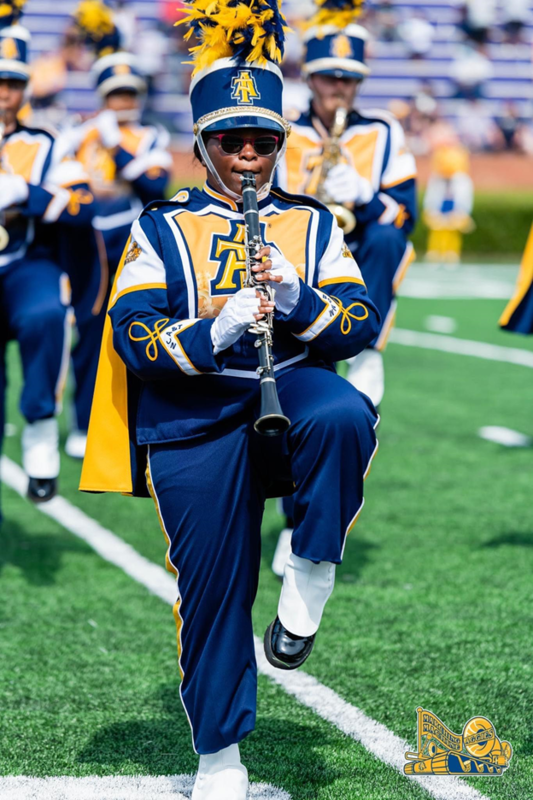 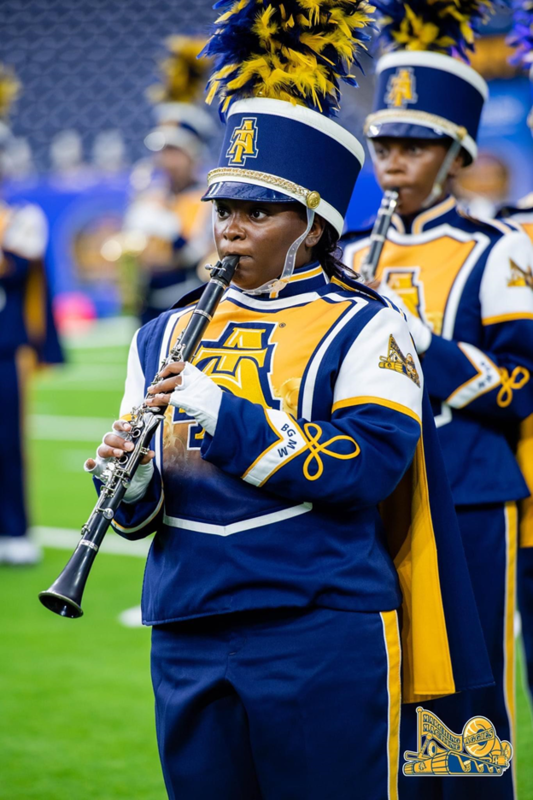 **Photos have been included with permission from the university. Photos were captured by the NC A&T State University Blue and Gold Marching Machine.**